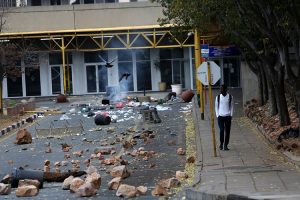 MAY 31, 2018. Barricaded entrance .The Charlotte Maxeke hospital, known to some as, Joburg Gen, was chaotic on Thursday.There were reports of some medical staff not being allowed to work. Entrances and exists were also barricaded. It is believed that the protests are being led by the National Education, Health and Allied Workers’ Union (Nehawu), “who say workers are protesting a long-pending dispute, allegedly over unpaid performance bonuses. They say the hospital has made several empty promises regarding payment.” PHOTOGRAPH: ALON SKUY

× chat with us on WhatsApp